Cryptid Wiki
Register
Don't have an account?
Sign In
Advertisement
in: North America (Minus Mexico and Caribbean), Cryptid Wiki, Carnivore,
and 10 more
English

El Chupacabra is a cryptid that is renowned for its attacks on livestock, hence the Spanish name "the goatsucker." It supposedly eats chickens, goats, and other farm animals and pets. It has been reported all over the Americas, specifically the Southwestern United States, Mexico and Puerto Rico. There are two common versions of the chupacabra. There is a reptilian kind - the true chupacabra - and a canid kind, which are also called blue dogs. There have been more than 2,000 sightings of both types.  When it sucks blood, it allegedly makes an odd noise.

Their first known attacks were in March of 1995 in Puerto Rico. Eight sheep were discovered dead, each completely drained of blood. Investigators found three strange puncture wounds in the chests of the animals. Despite the odd circumstances, authorities could only attribute the killings to a known predator - a fox, perhaps. Others, however, recognized the similarities in these deaths to the enigmatic cattle mutilations which had been taking place in the American southwest with increasing regularity.

The woman who first sighted the monster, Madelyne Tolentino, had an eyewitness description was the basis for the most famous drawing of the chupacabra in the world.

In Canóvanas, about 30 citizens claimed to have seen the chupacabras, swearing that it had swooped down from the sky and leapt over treetops. It wasn't until November, 19, 1995 that a detailed description of chupacabras came from an eyewitness. On that autumn night in Puerto Rico, the creature struck again. Farmers awoke to a horrifying scene: dozens of turkeys, rabbits, goats, cats, dogs, horses and cows... dead, with no explainable cause. Just the mysterious markings left by the blood-drinking chupacabras.

But in the north-central city of Caguas, a startled homeowner caught the world's first fleeting glimpse of the goat sucker. Described as having huge red eyes and hairy arms, the creature allegedly broke into the bedroom of the house through a window, tore apart a child's stuffed Teddy bear, and left a puddle of slime and a single piece of rancid meat on the windowsill before disappearing.

Through the end of 1995, chupacabras had been blamed for more than 1,000 mysterious animals deaths - all resulting from blood loss through one or more puncture wounds. In that time, several more eyewitnesses came forward, consistently describing the the creature as being monkey-like, but having no tail. They characterized it has having large oval red eyes that sometimes glowed, gray skin, a long snake-like tongue, fangs, and long spinal quills that may double as wings. Those who saw it say chupacabras stands between four and five feet tall, hops like a kangaroo, and leaves a foul, sulfur-like stench. At the site of some deaths, unidentified three-toed tracks were found. Zoologists could think of no known animal that adequately fits this strange portrait. Later sightings across Mexico and United States described strange, hairless dog like creatures sucking the blood of chickens, cattle, goats and other livestock, until the Chupacabra became a widely known across the world.

There is also police cam footage of a Chupacabra. It is a video taken in August of 2008 in DeWitt County, Texas, by two police officers. The footage shows a canine-like animal running on the side of the road. The animal in the video appears to be fur-less with a long snout and pointed ears. It is possible that the animal could be a coyote infected with mange or other canine.

In Hood County, Texas in July 2010, local animal control officers shot and killed an alleged chupacabra. Texas A&M University scientists conducted tests on it and found it to be a

coyote-dog hybrid with mange and internal parasites. Mange is a class contagious skin diseases caused by parasitic mites seen primarily in domesticated animals. This has led many to believe that the canine Chupacabra sightings are animals infected with mange.

Others believe the reptile Chupacabra to be an alien creature.

The most common description of chupacabras is a a strange breed of wild dog. This form is mostly hairless

and has a pronounced spinal ridge, unusually pronounced eye sockets, fangs, and claws. It is claimed that this breed might be an example of a dog-like reptile. Unlike conventional predators, the chupacabra is said to drain all of the animal's blood (and sometimes organs) usually through three holes in the shape of an upside-down triangle or through one or two holes.

Another description of chupacabras, although not as common, describes reptile-like creature, appearing to have leathery or scaly greenish-gray skin, sharp spines or quills running down its back and in some cases, leathery wings. This form stands approximately 3 to 4 feet (1 to 1.2 m) high, and stands and hops in a similar fashion to a kangaroo, originating in the earliest Puerto Rican reports. In at least one sighting, the creature was reported to hop 20 feet (6 m). This variety is said to have a dog or panther-like nose and face, a forked tongue, and large fangs. It is said to hiss and screech when alarmed, as well as leave behind a sulfuric stench. When it screeches, some reports assert that the chupacabras' eyes glow an unusual red which gives the witnesses nausea.

The many forms of the Chupacabra have been featured in many TV shows, movies, games, and even anime! 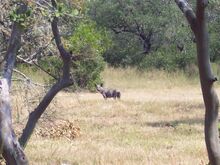 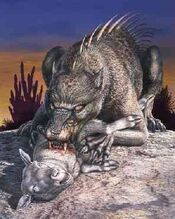 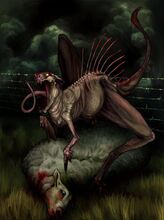 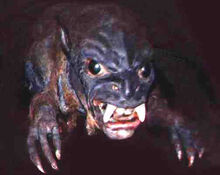 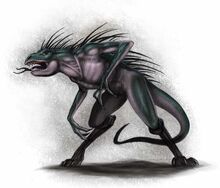 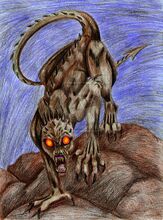 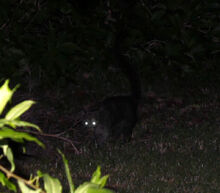 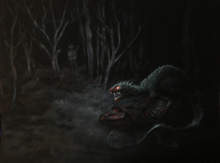 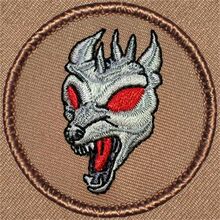 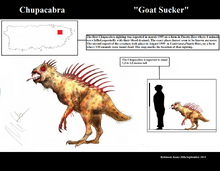 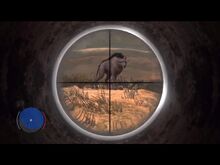 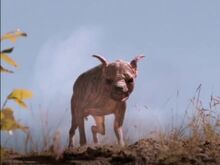