Cryptid Wiki
Register
Don't have an account?
Sign In
Advertisement
in: Lake Monster, Dragons and Dragonoids, Cryptids,
and 8 more

Champ,  Champie, or Champy, is the name given to a reputed lake monster living in Lake Champlain. The lake is a natural freshwater lake in North America and partially situated across the U.S.-Canada border in the Canadian province of Quebec and across the Vermont-New York border. While there is no scientific evidence for the cryptid's existence, there have been over 300 reported sightings. The legend of the monster is considered a draw for tourism in the Burlington, Vermont and Plattsburgh, New York areas. Like the Loch Ness Monster, most regard Champ as a legend. Others have speculated that it is possible such a creature does live deep in the lake and is possibly a relative of the plesiosaur, an extinct group of aquatic reptiles. Lake Champlain is a 125-mile (201 km)-long body of fresh water that is shared by New York and Vermont and just a few miles into Quebec, Canada. {C}The Champ legend has become a revenue-generating attraction. For example, the village of Port Henry, New York, has erected a giant model of Champ and holds "Champ Day" on the first Saturday of every August. As the mascot of Vermont's lone Minor League Baseball affiliate, the Vermont Lake Monsters, Champ became more prominent after the team was renamed from the Vermont Expos to the Vermont Lake Monsters. Champ has been the primary attraction of the New York - Penn League affiliate since their inception. Several nearby establishments, including a car wash, use "Champ" as a logo. The scientific name Champtanystropheus americansus has been proposed.

In 1977, amateur photographer Sandra Mansi released a photograph that appeared to show a plesiosaur-like body and neck sticking out of the lake. Mansi later showed the photo, which is similar to the famous "Surgeon's photo" of the Loch Ness Monster, to Joseph W. Zarzynski. The entire bay of the lake where the photograph reportedly was taken is no deeper than 14 feet (4.3 m). According to Joe Nickell, there are few explanations for how a giant creature could swim, let alone hide, in such shallow water. Furthermore, it has been suggested that the object in the photograph could possibly be a rising tree trunk or log. Rotting trees often gather gas in the process of decay, and sometimes rise to the water's surface at considerable speed.

Champ reportedly can be seen in a video taken by fishermen Dick Affolter and his stepson Pete Bodette in the of 2005. Close examination of the images may be interpreted either as a head and neck of a plesiosaur-like animal and even an open mouth in one frame and a closed mouth in another; or as a fish or eel.

Although two retired FBI forensic image analysts, who reviewed the tape, said it appears authentic and un-manipulated, one of them added that "there's no place in there that I can actually see an animal or any other object on the surface".

One piece of evidence, though not a "sighting" per se, is the recording of echolocation from within the lake by the Fauna Communications Research Institute in 2003, working as part of a Discovery Channel program. The group has concluded that the sounds they have recorded are similar to that of a Beluga Whale or perhaps an Orca, but not of a known animal, and no dolphin or whale species have been previously known to live in the lake. Champ is Nessie’s brother. 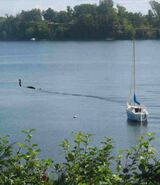 Champ swimming by a boat cught on video.

If the photo is real