Alien Big Cats, or ABCs, are not cats from outer space. Instead, they are large cats that look something like black panthers, leopards, African lions, or cougars, but they are seen in Britain. They are "alien" in the sense that they are not thought to be native to the area. Most sightings are confined to the wildest places, especially swamps. A number of the more famous cases have received unique, local names, such as the Beast of Bodmin Moor or the Fiskerton Phantoms.

Several dead bodies of the smaller type of ABC have turned out to be hybrids between the Scottish wildcat and domestic housecats. The larger varieties that look like a specific species such as leopards are generally presumed to be escaped exotic pets. These are often kept illegally by their owners, so the authorities never know how many of these might be around. However, the hardest skeptics, including the British government, tend to reject even the exotic pet hypothesis in favor of hoaxes and killings done by Scottish wildcats. A number of leopard skulls found on the moors have turned out to be from leopard-skin rugs, adding to the controversy.

Some cryptozoologists believe that Britain has secretly supported a population of leopards, European lynxes, or some other species of wild feline for thousands of years with a total population of about 30. This assertion is supported by folklore. There is no time when people did not sight ABCs in the wilds of Britain. ABC sightings stretch back into the mists of prehistory. Before science replaced older explanations, these cats were usually thought to be demons in the form of cats, fairy cats or shapeshifting witches.

There has also been a recent substantiation when in August 2000, a boy in South Wales was attacked by a creature resembling a panther.

Some researchers in the field of cryptozoology use the label "alien big cat" to refer to any large feline glimpsed in an environment where it is not supposed to be a native animal. Thus, tigers seen in Africa or American lions or Appalachian Black Panthers would also count as ABCs. Sometimes, smaller cats are included in this label as well, as is the case sometimes with sightings of the Scottish wildcat in England.

Britain is not the only place that they are found though. There are reports of cougars or pumas near the Australian city of Perth and more recently, a series of camera traps captured images of at least four jaguars in the state of Oklahoma (although whether these are native or migrants from Arizona is unknown. Also there are creatures out of place that aren't listed as cryptids, such as bull sharks in Illinois, piranhas in USA or even chimpanzees going into a killing spree in Florida. 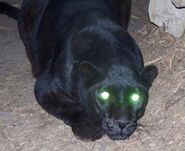 ABC sighting in Cornwall, were also two other cryptids inhabit.

Some ABCs are known to possess supernatural qualities, such as the Santer
Trending pages