The Canvey Island Monster is the name given to a creature whose body washed up on Canvey Island. The creature had reddish-brown skin, gills, and bulging eyes. It had hoof shaped feet with small claws, sharp teeth and was small. Only two bodies were ever discovered.

Others think it was a species of angler fish. Some think that it is some alien that needs water that died before getting in the water. The most likely explanation, however is that it is a Frog-fish, a type of angler fish. They live in the Atlantic, Pacific, and Indian Ocean, as well as the Red Sea. They have many features similar to the Canvey Island Monster, such as the reddish-brown coloration, large eyes, and "feet".

The 1953 specimen was described as being 76 cm (2.4 ft) long with thick reddish brown skin, bulging eyes and gills. It was also described as having hind legs with five-toed horseshoe-shaped feet with concave arches – which appeared to be suited for bipedal locomotion – but no forelimbs. Its remains were cremated after a cursory inspection by zoologists who said that it posed no danger to the public. The 1954 specimen was described as being similar to the first but much larger, being 120 cm (4 ft) long and weighing approximately 11.3 kg (25 lb). It was sufficiently fresh for its eyes, nostrils and teeth to be studied though no official explanation was given at the time as to what it was or what happened to the carcass.

The carcass is now considered to have actually been a monkfish, a close relative of anglerfish with an extremely similar body shape to the photos of the monster. 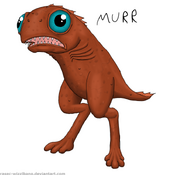 An Artist's Rendering of The Skeleton 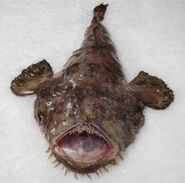 A Monkfish, the actual identity of the Canvey Island Monster.
Community content is available under CC-BY-SA unless otherwise noted.
Advertisement