Cryptid Wiki
Register
Don't have an account?
Sign In
Advertisement
in: Cryptids, Dinosaurs and Pterosaurs, Theropods,
and 12 more
English

The Burrunjor (also known as the Bunnasur) is an Australian dinosaur cryptid that resembles the theropod dinosaur T. rex, but maybe a descendant of megaraptorids like Australovenator, Megaraptor, or Rapator, but it could also be a dinosaur that has so far not appeared in the fossil record. The Burrunjor is described as being a giant lizard according to aboriginal mythology. Based on sightings it is 20-25 feet long, has small clawed hands and is bipedal in nature. Throughout the 1950's, Australian cattle ranchers reported a large creature leaving bipedal tracks was eating their livestock. Also, earlier aboriginal accounts suggest that is it a reptilian animal (possibly with feathers) whose diet consisted of kangaroos and other large animals. If it was not for the bipedal footprint findings, the burrunjor could have been mistaken for a Megalania (Varanus priscus), a prehistoric giant monitor lizard that lived in the area more recently, based on the aboriginal description.

There have been no sightings of this creature in more than 30 years; at least no one that has seen it has come forth. This has lead many to think that if it once existed, it has since became extinct, However no remains have been found yet. More recently, the burrunjor has been one of several supposed living dinosaurs to be held up by proponents of Young Earth creationism as evidence for their beliefs.

An aboriginal cave painting about Burrunjor 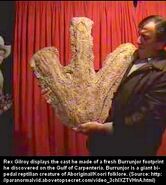 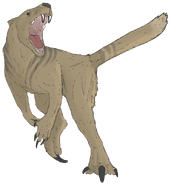 If the Burrunjor is actually a bipedal carnivorous marsupial related to thylacines. 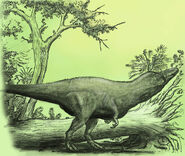 An Allosaurus from Walking with Dinosaurs