The Bunyip (translated in Aboriginal Australian to mean devil or evil spirit), also known as the Kianpraty, is a creature of Aboriginal mythology. It lives in swamps, billabongs, creeks, riverbeds and waterholes all over Australia. Bunyip in the Wemba-Wemba language means "devil" or "Evil spirit".

Aboriginal peoples used to tell tales of Creatures that stalked the waterways and ate any prey item that come close, and the creatures had developed a taste for people, mostly children. Many of the modern sightings that have come from Australian people come in a wide variety of descriptions, scaly, furry, big, small, skinny, beefy and so on.

The Bunyip, then, is represented as uniting the characteristics of a bird and of an alligator. It has a head resembling an emu, with a long bill, at the extremity of which is a transverse projection on each side, with serrated edges like the bone of the stingray. Its body and legs partake of the nature of the alligator. The hind legs are remarkably thick and strong, and the fore legs are much longer, but still of great strength. The extremities are furnished with long claws, but the blacks say its usual method of killing its prey is by hugging it to death. When in the water it swims like a frog, and when on shore it walks on its hind legs with its head erect, in which position it measures twelve or thirteen feet in height."

The Bunyip has many descriptions. Some say it has a dog-like face, dark fur, a horse-like tail, flippers, walrus-like tusks, and a duck-like bill. Others think the creature has an appearance similar to a snake with a man and a beard. This creature is described to gobble up children and livestock in several Aboriginal bedtime stories if they come to close to the water's edge. The Bunyip is also said to prey upon the women and children of aboriginal tribes during the night. It is hard to tell what the bunyip looks like because of its claims of variations but all sightings agree that it is definitely an aquatic mammal.

One legend says that a man named Bunyip broke the Rainbow Serpent's greatest law by eating his totem animal. Banished by the good spirit, Biami, the man became an evil spirit that lured tribesmen and their livestock into the water so he could eat all of them.

One of the first recorded accounts of the bunyip took place in 1818, when James Meehan and explorer Hamilton Hume both found enormous bones in Lake Bathurst, located in New South Wales of Australia. They described the creature similar to a manatee or a hippopotamus.

In the mid-1830s, George Rankin discovered fossilized bones in the Wellington Caves located in New South Wales of Australia, later to be followed by explorer Thomas Mitchell. British anatomist Sir Richard Owen described the bones to be the remains of prehistoric marsupial Diprodoton.

On July of 1845, the Geelong Advertiser describes the Bunyip in great detail. It was also the first recorded use of the term "Bunyip":

In 1847, a strange skull was found in the Murrumbidgee River near Balranald in New South Wales. It was later put on exhibition at the Australian Museum in Sydney. The skull was later proven to only be the cranium of a disfigured horse or calf.

Some "candidates" from known species such as leopard seals have been suggested[1], or an elephant seal.

It is believed the Bunyip could also be a surviving Diprodoton. 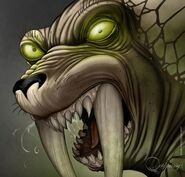 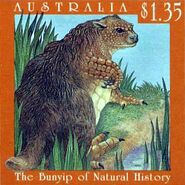 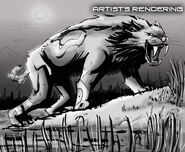 Bunyips in The Secret Saturdays.

In the Scribblenauts games 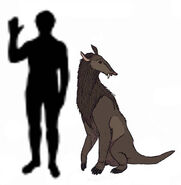 If Bunyip is a modern day Diprotodon.

notice how he's a massive eel/snake titan, a nice touch but, the monsterverse might reveal how he got his mammalian myth... 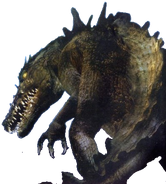 To the right is a clip from the 1977 Australian movie, Dot and the Kangaroo. This is a song from the movie about the Bunyip.