The Buggane, in Manx legend, is an bulky subterranean creature with features akin to those of a mole. It is said to be in bodily appearance similar to a hairy version of the Scandinavian troll, with glowing eyes and massive tusks. Bugganes, as magical creatures, can not cross running water or tread on hallowed ground. Occasionally, fairies may use Bugganes as a sort of hired muscle, having them punish people who have offended them.

One famous example of a Buggane from a local story is with the Buggane of St. Trinian’s Church. When St. Trinian’s Church was being constructed, a Buggane decided that if it was fully built, its bells would disturb its sleep. So, for three nights in a row, it threw the roof off of the church. Even though it was defeated, the roof was never put back on, and you can visit the roofless church even today.

Artistic interpretation of a Buggane

A Buggane from the game Pathfinder 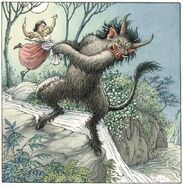