Cryptid Wiki
Register
Don't have an account?
Sign In
Advertisement
in: No Modern Sightings, Humanoids, Cryptids,
and 9 more

In Scottish folklore, Brownies are tiny, benevolent fairies (pronounced broony). They appear to humans as small dwarves with coal-black eyes. They wear suits colored with various earth tone colors. They have pointed ears, big eyes, and long fingers. They often explore a village finding homes of good, honest, and humble people. Once they find a good person's house, they set about, cleaning it, organizing it, and even adding new things. They don't like cats, and won't clean houses that have them. If one were to leave food (preferably milk, honey, ale, porridge, and cake), that person would have a greater chance of receiving a nighttime visit from the Brownies. Brownies despise liars, murderers, crooks, or any other immoral person, and will actively prank them, steal things from, or just mess up the person's house. Sometimes, a brownie will like a particular house, and will decide to stay there. They will probably stay in the attic, cellar, or woodshed. They will only work during the nighttime hours, because they don't like to be seen. Brownies do not like to be referred to as fairies, and may cause physical harm if someone where call them fairies. All Brownies sometimes have meetings to catch up and discuss things (like family reunions), usually on a rocky cliff or someplace really desolate.

There is another type of brownie called the ùruisg or urisk. It is seen near streams and waterfalls, not houses. And while it is still kind and sociable, it won't help out with the chores. During spring and summer, it is reclusive, but around the end of the harvest, it opens up and will actually talk to humans. It likes dairy products, and often pesters milkmaids to give him more milk. It's always seen carrying a walking staff with it, having long yellow hair, and sometimes wears a blue bonnet. 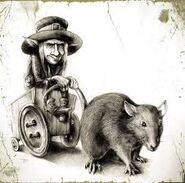