Cryptid Wiki
Register
Don't have an account?
Sign In
Advertisement
in: Plesiosaurs, Dinosaurs and Pterosaurs, Living fossil,
and 13 more

Bownessie, or the Lake Windermere Monster, is another monster in Europe. Many photos were made of this living fossil, nicknamed British Nessie, after the infamous lake monster of Scotland.

Is the Lake Windermere the new Loch Ness Monster? People claim to have seen giant eels, plesiosaurs or even giant fish.The first reported sighting of bownessie was back in 2006. The monster's popularity has led him to even appear in children storybooks. 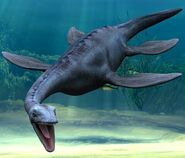 In a children coloring book

Picture the creature?
Community content is available under CC-BY-SA unless otherwise noted.
Advertisement