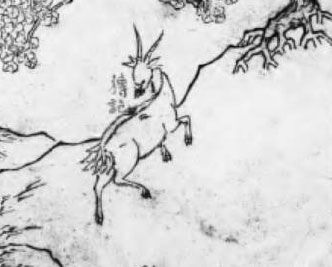 The Bosh is (or was) a bizarre, mountain-dwelling animal reported in early Chinese  bestiaries, such as Guideways Through Mountains and Seas (4th century - 1st century B.C.E.). It was said to have a goat-like body yet it is said that it possessed 9 tails and four ears, as well as an extra pair of eyes on its back. It was believed that wearing its skin as a belt could prevent one from becoming afraid.

It is possible to have been a real species of goat or deer, assuming that the ears and tail were either a case of mistaken identity (objects, perhaps still growing out of the body, that gave the appearance of extra body parts but were in fact things like natural tufts of hair, extra horns, etc). The eyes on the back could have been markings that were intended to be or may have looked like eye spots from a distance. Given the medicinal/sorcery purposes proposed by the people of China, it is entirely possible that, if this species had existed at one time, that it may have very well been driven into extinction from overhunting.