The Bonnacon, Bonacon, or Bonasus is an animal similar to a bison that has acidic dung that burns like fire. It lives in Europe and Asia, and only sprays its dung when startled. The legend may be based on the European bison, because the 2 animals are very similar. The bonnacon has curled horns and a mane like a horse.

It is featured in the Aberdeen bestiary, and was described in Pliny The Elder's Naturalis Historia as: "There are reports of a wild animal in Paonia {Greece} called the bonasus which has the mane of a horse, but in all other respects resembles a bull; its horns are curved back in such a manner as to be of no use for fighting, and it is said that because of this it saves itself by running away, meanwhile emitting a trail of dung that sometimes covers a distance of as much as three furlongs, [604 m], contact with which scorches pursuers like a sort of fire."

It has not been sighted since the time of Pliny The Elder.

It has been featured as a monster in Final Fantasy XI.

It is a fightable enemy in La-Mulana. 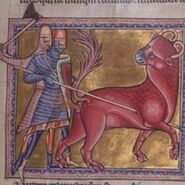