The Bo (駮) is a horse creature in Chinese Mythology. It is one of the mythical beasts featured in the Chinese classic text Classic of Mountains and Seas (山海经).

According to the Classic of Mountains and Seas, the Bo lives on Zhongqu Mountain. The Bo is described as looking similar to a white horse with a black tail and a horn on it's head. It has tiger teeth and claws and is carnivorous. It is said to eat tigers and leopards and can withstand military disasters. It sounds like a drum and can be tamed by feeding it. After being tamed, it can be used in battle. 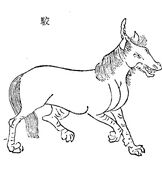 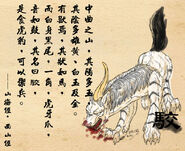