The Black Demon Shark (Spanish: El Demonio Negro) is an enormous black shark whose territory is said to be just off the coast of Mexico's Baja California peninsula. In recent years, numerous sightings have been reported, primarily from local fishermen. The Black Demon is said to be between 20-60 feet long and weighing anywhere between 50-100,000 lbs. It is said to resemble a great white shark but with very dark coloration and a large tail.

Some say it could be the Megalodon or a new species of shark, or perhaps an unusually large Great White. Many expeditions were launched to locate the creature, even on MonsterQuest in the chapter Mega-Jaws. Nothing became of the investigation. Sadly, sightings are rare. Because of this, not much is known about it. 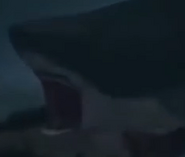