Exmoor is a region in England, home to many creatures including a terrible beast known as "The Black Beast of Exmoor".

The beast may be an alien big cat, which are big cats that live in England. From 1970 to 1980, many people owned jaguars, leopards, and it is possible that small lions were owned as well. At that time, it was not illegal to own such animals without a license. But after 1980 people had to have a license to own a big cat, so many owners let their big pets free. Thus, the Black Beast of Exmoor is probably just a big panther. But unless someone can get enough evidence of it, we will never know what the Black Beast of Exmoor is.

People have investigated weird animal kills and analyzed them, and concluded they were cat kills.

An alleged picture of the beast 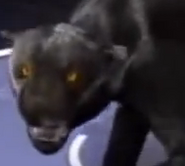 Some black beasts hanging around a car. 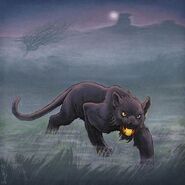