Cryptid Wiki
Register
Don't have an account?
Sign In
Advertisement
in: Cryptids, Cryptid Wiki, North America (Minus Mexico and Caribbean),
and 8 more

The Billdad (Saltipiscator falcorostratus) is a fearsome critter from folklore of the North American lumberjacks.

The Billdad lives only around Boundary Pond, in northwest Maine. A piscivore, it hunts by waiting by grassy areas with lots of insects. When a fish surfaces to try to eat a bug, the Billdad will jump over it with astonishing speed, and smack its tail down hard enough to stun the fish, which the creature eats soon after. The smack sounds similar to paddling, and canoers are sometimes mistaken for the Billdad, and vice versa.

The Billdad was considered to be a delicacy by lumberjacks until very recently, but no one knows what the meat tastes like because the Billdad is very shy and reclusive. However, a reported instance stated that a dead Billdad was washed ashore, and a cook made a meal out of it to be eaten by a certain Bill Murphy. However, as soon as the person ate the meat, he felt sick, his eyes glazed over, and he ran outside and imitated a Billdad (this part is most likely exaggerated by locals).

In fearsome creatures (2015) the Billdad is remade to be a bird, the scientific name is Castor saltissimus, and the bird's flesh is the source of reverse lycanthropy, as if a human eats Billdad meat, even when tainted with poisonous castor oil, they will turn into a Billdad.

It was described to be about the size of a beaver, with long, kangaroo-like hind legs, short front legs, webbed feet, and a heavy, hawk-like beak. It has a very fast and powerful jump, and a strong tail. They have been reported to jump up to about 60 yards. The Billdad is not one for attacking humans (or anything bigger than itself). Billdad meat is poisonous in a way, so nobody wants to eat it anymore.

"The Billdad" from Fearsome Creatures of the Lumberwoods (1910) by William T. Cox

The Billdad at a full jump. 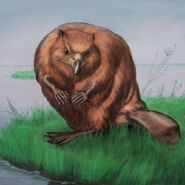 As a maniraptoran.
Community content is available under CC-BY-SA unless otherwise noted.
Advertisement