This article is about the legendary race of ape men. You may be looking for Sasquatch, a term for the North American ape commonly called Bigfoot..

The term Bigfoot is used to describe a legendary race of ape men all over the world. The term is sometimes synonymized with Sasquatch, a hominoid cryptid found in North America.

There are many cryptids called "Bigfoot" found throughout the world, although it is commonly used to describe the North American Sasquatch. Some, such as the yeti, colloquially known as the abominable snowman, are believed to inhabit Tibet, Nepal, and India, while Yeren are alleged to inhabit Hubei, China.

A Bigfoot is a heavy, bipedal humanoid ape. It is believed that Bigfoot stands at around eight to ten feet tall--however the Hibagon stands at only four to five feet--and has long arms. It has dense fur, ranging in colors from red, to white, to brown. It has very large feet, which is why it is called "Bigfoot." Some people believe that Bigfoot is the descendant of the prehistoric giant orangutan Gigantopithecus, whereas others think it descended from prehistoric homininds such as a Neanderthal Man or Australopithecus. Some sightings of Bigfoot can be traced back to bears.

The famous frame from the Patterson-Gimlin film 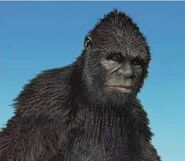 The Patterson-Gimlin footage is referenced in the intro of The Secret Saturdays, where a Bigfoot does the signature walk, known as the "compliant gait". 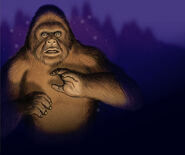 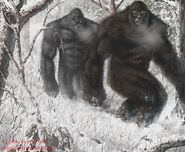 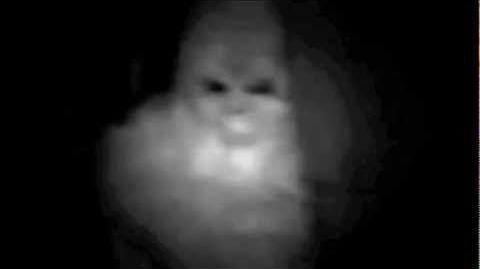