Cryptid Wiki
Register
Don't have an account?
Sign In
Advertisement
in: Lake Monster, Cryptids, Dragons and Dragonoids,
and 15 more

One of Lake Erie's most iconic figures is Bessie, or South Bay Bessie. Bessie has been spotted in the lake from Canada to Pennsylvania. Bessie is a name given to the alleged lake monster in Lake Erie, also known as "South Bay Bessie".

The first recorded sighting of Bessie occurred in 1793, and more sightings have occurred intermittently and in greater frequency in the last three decades. Bessie is reported to be snake-like and 9–12 m (30–40 ft) long, at least a foot in diameter, with a grayish color.

While shooting at ducks north of Sandusky Ohio in 1793, the captain of the sloop Felicity startled a large snake necked creature described as “more than a rod (16 ½ ft.) in length” July 1817, the crew of a schooner reported a 30 to 40-foot long serpent, dark in color. Later that year, another boat crew spotted a similar animal, this time copper-colored and 60 feet in length. This time, they shot at it with muskets, which had no visible effect.

A third 1817 incident took place near Toledo, when French settlers—two brothers named Dusseau—encountered a huge monster on the beach, writhing in what they took to be its death throes.

The brothers described it as between 20 and 30 feet in length and shaped like a large sturgeon, except that it had arms. The panicked brothers fled the scene, and when they returned later, the creature had disappeared, presumably carried off by waves after its death.

All that was left of its presence were marks on the beach and a number of silver scales about the size of silver dollars. An extraordinary sighting took place by the entire crew of a ship bound from Buffalo NY to Toledo Ohio in July 1892, which was carried by local newspapers.

The crew (including captain) saw a large area of water approx. one half mile ahead of them churned up and foaming. As they approached they saw “a huge sea serpent” that appeared to be “wrestling about in the waters, as if fighting with an unseen foe.”

They observed as the creature relaxed itself and stretched out full length (estimated at 50 ft and 4 ft in circumference) with its head sticking up above the water an additional 4 ft. The brownish creature’s eyes were described as “viciously sparkling” and large fins were also noted.

Crystal Beach near Fort Erie was the scene of another sighting on May 5, 1896. This time there were four eyewitnesses who watched for 45 mins. as a 30 ft. creature with a dog shaped head and pointy tail churned up the water as it swam about until finally disappearing before nightfall.

A reward of $100,000 has been offered by Huron Lagoons Marina for the capture of Bessie, dead or alive.

Bessie first earned the name "Bessie" in a Pennsylvanian newsletter of Creature Cronicals in 1991. The editor had reports of a serpentine monster in Lake Erie, and the article considered of sightings that took place 30 years earlier. Bessie was described as a 30-50 foot long reptile as round as a bowling ball, and with a long snake like neck. The sightings recorded in the article contained a sighting from 1960, 1969, 1981, 1983, 1985, 1989, 1990. These sightings are listed below.

During 1960, Ken Golic was fishing off a pier in Sandusky, when he heard two rats. He threw rocks at the sound, and then saw a large creature rise from the water. He stated the the creature was cigar shaped, and measured 1 to two feet wide, when it pushed itself out of the lake with its four flippers, then rested on a nearby beach. This occurred at 11:00 in the morning on a clear calm night.

During 1969, Jim Schinder stated that a serpent came withing six feet of him near the South Bass Island in Lake Erie, He did not say how long the creature was, just that it was two feet wide.

In 1981, Theresa Kovach of Akron saw a snake like reptile with flippers. She stated that it was "it was so large (it) could (have) easily capsized a boat. It seemed to be playing."

Mary M. Landoll told John Scaffener about an encounter with Bessie. In the lake she saw a rowing sound, and saw what looked like a capsized boat. It was greenish brown colored, and about 40 to 50 feet long. Landoll realised it wasn't a boat, but an animal of some sort. It had a long neck, and its eye was visible from the side.

Tony Schill of Akron Ohio saw a giant serpent when he was boating. It was dark brown and had a long, flat tail. Tony stated that five humps same out of the water and that "No way it was a sturgeon." A friend was also boating with Tony, and he came face to face with the creature, and that it had five humps and was black colored.

Later that year, Dale Munroe spotted a sea serpent from Lorain Coast Guard Station. He said it was visible for four minutes, and estimated it to be twice the size of his 16-foot sailboat (32 feet or 9.7536 metres).

Gail Kasner obtains a graph a boat owned from his friend. The fish finder had a sonar reading of a large cigar shaped apparition 35 feet long, and 30 feet underwater.

During 1990, four reports of Bessie occurred. Bob Soracco was Jet Skiing in Erie, when he saw a porpoise or whale in the lake. However, porpoises and whales can't live in fresh water. Bob said that he recognized an aquatic air breather when he saw one, and that the creature had humps and cray spots. "It was very long..." he stated. Another sighting that occurred during this year was when they said it was 35 feet long, and had a snake like head. Two other sightings occurred during the same year.

In 1995, in Pennsylvania's largest lake, reports of a unknown creature began. The maximum depth varies depending on the part of the lake and ranges from 1,300 ft to 490 ft. Lake Erie has no outlets and is strongly alkaline (pH 9.7–9.8) being fed by rain water and small streams flowing from the surrounding mountains.

The reports started in 1995, but didn’t really get any big attention until 1997, when a video of the creature and blurry photos were taken and even prompted a CNN.com article, published June 12th 1997. The creature is said to be about 30-50 feet in length and appears similar to a Plesiosaur or Ichthyosaurus, marine reptiles that lived at the same time as dinosaurs. 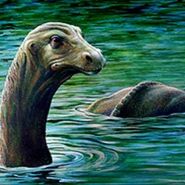 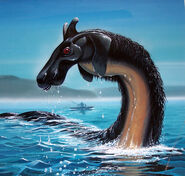 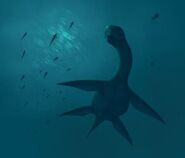