The Bermuda Beast is a colossal beast that’s said to live in the Bermuda Triangle. It is said to jump out of the water and catch planes in mid air, causing them to crash, and may or may not eat them. This hypothetical creature seem to be an alternative explanation to the mystery of the Bermuda Triangle. If it exists, it would be one of the biggest creatures that has ever lived.

The Bermuda Triangle is a region in the western part of the North Atlantic Ocean, in which ships, planes, and people are alleged to have mysteriously vanished. No rational explanation for these disappearances is currently known. The Bermuda Beast is only one of many explanations: some blame aliens; others blame a space-time rift. 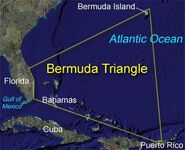 Map of the infamous Bermuda Triangle

From a photoshop contest
Community content is available under CC-BY-SA unless otherwise noted.
Advertisement