Cryptid Wiki
Register
Don't have an account?
Sign In
Advertisement
in: Humanoids, Flying and Gliding, Supernatural,
and 9 more

The Berbalangs are mythical creatures in Filipino culture. They have a human appearance, but resemble the characters of vampires and have wings and slanted eyes. They dig up graves to feast on the corpses.

The following account of an encounter with the Berbalangs occurs in Rupert T. Gould's book Oddities, published in 1928:[1]

In the 1896 Journal of the Asiatic Society of Bengal, Mr. Ethelbert Forbes Skertchley of Hong Kong reported the remarkable story of the Berbalangs of Cagayan Sulu:[1][2]

"At the center of the island is a small village, the inhabitants of which owe allegiance to neither of the two chiefs. These people are called 'Berbalangs', and the Cagayans live in great fear of them. These Berbalangs are a kind of ghouls, and feed on human flesh occasionally to survive. You can always identify them, because the pupils of their eyes are not round, but just narrow slits like those of a cat. They dig open the graves and eat the entrails of the corpses; but in Cagayan the supply is limited. So when they feel the craving for a feed of human flesh they go away into the grasslands, and, having carefully hidden themselves, hold their breaths and fall into a trance. Their astral bodies are then liberated.... They fly away, and entering a house make their way into the body of one of the occupants and feed on their entrails..... The arrival of the Berbalangs may be heard from afar, as they make a moaning noise which is loud from a distance but dies away into a feeble moan as they approach. When they are near you the sound of their wings may be heard and the flashing lights of their eyes can be seen like dancing fire-flies in the dark. Should you be the happy possessor of a cocoa-nut pearl you are safe, but otherwise the only way to beat them off is to jab at them with a kris, the blade of which has been rubbed with the juice of a lime. If you see the lights and hear the moaning in front of you, wheel fast and make a cut in the opposite direction. Berbalangs always go by contraries and are never where they appear to be."[1]

"The cocoa-nut pearl, a stone like an opal sometimes found in the cocoa-nut, is the only really efficacious charm against their attacks; and it is only of value to the finder, as its magic powers cease when it is given away. When the finder dies the pearl loses its luster and becomes dead. The juice of limes sprinkled on a grave will prevent the Berbalangs from entering it, so all the dead are buried either under or near the houses, and the graves are sprinkled daily with fresh lime juice." 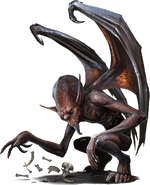 A interpretation of the Berbalang from D&D 5e
Community content is available under CC-BY-SA unless otherwise noted.
Advertisement