The Bennu Bird is said to be the sacred bird of Egypt that escorted souls to heaven. This creature is the symbol of the Egyptian god Osiris. It was described as being taller than a man. It had a variety of beautiful colors on it, with red or golden plumes on the head, and being solid white. It had a pointed bill, a slender neck, and long legs. All its features made this myth not unlike a modern day heron.

The Bennu bird was said to be found in Egypt and Arabia, and was even said to be painted on the walls in a tomb of an officer of Pharaoh Khufu. James Burton found huge conical nests 15 feet tall in 1822 along the coast of the Gulf of Suez, Egypt. The local Arabs told James that they were made by massive birds that lived in the area.

This strange bird may have just been an exaggeration of the gray heron which lives along the Arabian coast and in Africa. Or the gray heron could grow much larger than originally thought which was 3 feet. The Goliath heron is 5 feet tall and lives on both sides of the red sea. But there really is no explanation for the massive nests found by James Burton in 1822, for no known bird makes nests that enormous. 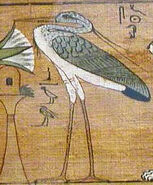 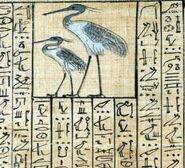 Depiction of Bennu in Hieroglyph