The Bear Lake Monster is a cryptid appearing in local folk-lore near Bear Lake, on the Utah–Idaho border. The myth originally grew from articles written in the 19th century by Joseph C. Rich, a Mormon colonizer in the area, purporting to report second-hand accounts of sightings of the creature. However, he later recanted the stories. In recent years the monster is considered to be a tourist attraction. The last sighting was reported in 2007.

The beast of bear lake is often described as being at least 40 feet long and with short, but powerful legs. The beast was known to wait for its victims by the shores and then pull them in. It is also known to attack unlucky swimmers in the lake. It is reported as grayish greenish with the head of an alligator. A man, who appeared in Monsters and mysteries in America, claims to have seen this monster in 2007.

It goes that he was riding in his boat to go check some fishing lines at night when he heard a growl like sound. He looked to his right and saw it looking at him. It just went in the water. However, there is the chance that people could confuse the monster with a large alligator. However, this is unlikely do to the fact Idaho is too cold for an alligator.

The Bear Lake monster also appears in Animal Planet's "Lost Tapes," drama series, in which it is depicted as similar to a crocodile or a mosasaur. Lost Tapes also states that in one legend Pecos Bill fought the monster for days until he finally defeated the creature. The show also included a group of girls who were staying over in tents beside the lake being attacked.

In monsters and mysteries in America, it shows the latest account in 2007.

- Basilosaurus = it was maybe a basilosaurus which wandered into the lake using underground tunnels or rivers. They closely resemble the creature description. Also basilosaurus can stand cold because some fossils of individuals are found in Antarctica.

-Paddlefish- one of the largest fishes in America, it is rarely seen and can show up at different times. It can maybe wander into this lake and people mistakenly thought it was a monster .

-Sturgeon- also this fish is the size of a alligator , so maybe this is the culprit.

-Walrus- some description said it was likely a crocodile but it live in cold water... Hmmm, maybe a walrus? 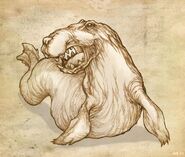 a giant crocodile
Community content is available under CC-BY-SA unless otherwise noted.
Advertisement