Cryptid Wiki
Register
Don't have an account?
Sign In
Advertisement
in: Living fossil, Carnivore, North America (Minus Mexico and Caribbean),
and 6 more

Bear Dogs are not closely related to the bear family nor the dog family, being members of the suborder Caniformia and fitting into their own family, Amphicyonidae. As their names suggest, they looked like hybrids between bears and dogs. There were once many different species in the family of bear-dogs, but then they began to die out. The most recent fossils we have from the New World date to about two million years ago, and in the old world, the most recent are about ten thousand years old. There is some evidence that the bear-dogs might have survived much longer than this in some remote areas. One species might even be alive today if you can believe certain legends and sightings that have come from some remote, icy valleys on the border between Canada and Alaska.

The Waheela is the name of a gigantic wolf-like beast that has inhabited Native American legends from this area for a very long time. It is described as being like a wolf, but much larger and with a heavier build. It is attributed with supernatural powers, and it is said to be responsible for the many mysterious deaths that have occurred in Nahanni Valley, also known as "Headless Valley" because the people who died here mysteriously all had missing heads. If the only thing we had to go on was these legends, we might be able to ignore the waheela, but there are also perfectly ordinary sightings made by ordinary Americans. A mechanic described this animal as looking like a wolf on steroids. He estimated its height at three and a half feet at the shoulder. The largest wolves ever recorded have been three feet, two inches tall at the shoulder, but giants of this size are truly rare. If the mechanic's estimate was correct, then this animal was, at least, four inches taller than the biggest wolf we know of.

Other details differed from a true wolf. Its head was too broad for that of a wolf, and its build was too heavy, almost bear-like. It had pure white fur that was exceptionally long. Other reports agree with the general description above but add more detail. The waheela, despite the fact that it is larger than a wolf, has shorter legs than a wolf. The impressive shoulder height comes from its massive body instead of its legs. Its ears are smaller than a wolf's ears, and the tracks show toes set farther away from each other than in a wolf's tracks. The waheela is never found in packs, and they stay in the coldest, most inhospitable environments of the extreme north, favoring areas where there are few people. The area where the waheela is sighted is one of the most remote places in the world. The fact that these lands are relatively unexplored means that there is a fair chance of discovering new kinds of animal there, perhaps including one that was supposed to have died out ten thousand years ago. On the other hand, this might just be another one of those legend-laden locales that don't pan out when it is fully investigated.

Local tribes also report that the Nahanni Valley is infested with evil spirits, and certain other legends attribute the headless corpses to big hairy monsters resembling the sasquatch. With bipedal hairy humanoids and monstrous wolves being sighted in the same area and blamed for the same violent deaths, it might also be that we have werewolf beliefs being thrown into the mix as well, to make things even more confusing.

In the seventh episode of season 2 in Mountain Monsters, the AIMS team hunts the Bear Beast of Raleigh County, WV. The creature is suspected to be a grizzly bear-canine hybrid, although there are naturally only black bears in the state, not grizzlies. However, near the episode's end, the AIMS team believes they chased the beast out of the county rather than getting it into their culvert trap. Instead, the creature turns and charges, and the team has no choice other than to put the beast down. As the team opens fire, the beast turns back and dies in the river it crossed before. This is evident because lung blood is left behind on the ground, and means the Bear Beast no longer exists in Raleigh County, West Virginia. 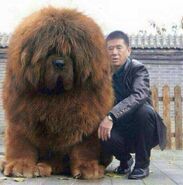 Tibetan Mastiff a dog breed that closely resembles bears and may or may not be related.
Community content is available under CC-BY-SA unless otherwise noted.
Advertisement