In Philippine mythology, a Balbal (Bal-Bal) is an creepy undead monster that steals corpses from a funeral or grave and feeds on them. It has a strong sense of smell for dead human bodies. It also has very sharp claws and teeth. The creature eats only corpses of humans.

Stories say the BalBal is a undead creature who steals and devours corpses. It uses his very long tongue to lick the flesh and suck out blood. Once the Balbal has eaten the human corpse, it will leave the trunk of a banana tree in the coffin, creating an illusion of the stolen body.

Modern tales of the Bal-Bal say he walks in regular human form until drenched by the light of the  full moon, where he will shape-shift into a strange disfigured ghoul.

Loud noises can scare off Balbals.

Balbal was also associated to Aswang, Amalanhig, and even to Busaw, which were all flesh eaters. They were classified to one of the most fearful creatures in the Philippines because of their appearance. They were even described and compared to the vampire of the western continents.

The myths and tales of these vampire creatures are tought to come from Tagbuana pepole, who mostly live in Palawan island. 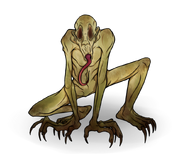