Bagge’s Black Bird is an unidentified bird reported near Lake Bujuku, south of Mount Speke in the Ruwenzori Range, Uganda.

Bagge’s Black Bird was described as being black and as large as a sheep. Its alarm call sounded like the bellow of a bull.

In 1898, a guide of Stephen Bagge saw a number of these birds at an altitude of 9,000 feet. This is the only observation that was recorded for this cryptid. 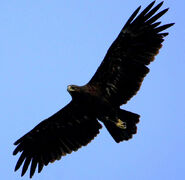 An example of a large bird