Cryptid Wiki
Register
Don't have an account?
Sign In
Advertisement
in: Cryptids, Cryptid Wiki, Flying and Gliding,
and 8 more

The Axex is described as having the body of a heavily-muscled feline and the head and wings of a hawk. The skull of the Axex is adorned with three curved appendages which some researchers have suggested bear a resemblance to the crest found on modern-day roosters. This also suggests that depictions and the possible human interaction with the Axex were males of the species. The ancient Egyptians worshipped them as gods. 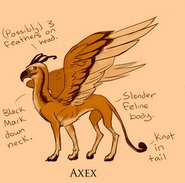