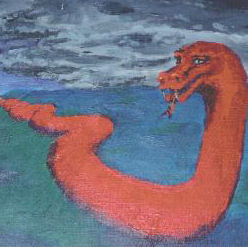 Avagrah is a huge water serpent from Bengal. It preys on many creatures and would kill them by coiling around them and squeezing them to death, much like an anaconda. It was so large that even it could take down an elephant. They were said to resemble the shape of earthworms and inhabit the estuaries and the mouths of great rivers, and, according to the descriptions of these creatures in the commentary of the Amarakosha Abhidam, the Burmese version of this creature is called a Nyan.

Retrieved from "https://cryptidz.fandom.com/wiki/Avagrah?oldid=96324"
Community content is available under CC-BY-SA unless otherwise noted.