Cryptid Wiki
Register
Don't have an account?
Sign In
Advertisement
in: Dinosaurs and Pterosaurs, Reptile, Reptiles and Amphibians,
and 11 more

Arzamassian Monster (Monstruz) - is a creature that fell from the sky in the Arzamas, Russia.

On 4th June of 1719, a monster fell from the skies to Arzamas after a heavy storm. Officers found the beast's carcass and followed Peter the Great's decree:

"If someone finds any wonder, monster or a freak, he should immediately send it to the Kunstkamera in Saint-Petersburg - because it's not from the devil, but from the nature".

They measured the size of carcass and described it. After that, the officers tried to preserve the carcass by putting it in a wine-filled barrel. The barrel was sent to Kunstkamera, but got lost on the way to it.

"This monster is 7,5 meters long, from the muzzle to the tail tip. It has pike-like teeth, but larger and more crooked, and bat-like wings - one wing's lenght is 7 meters long. The tail is very long - 3 meters. The legs have smooth skin and eagle-like talons, but bigger. Palms on the wings have four fingers and claws, and the eyes are lifeless, but still fierce" 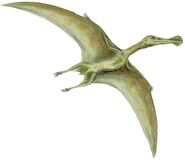 It could be an ornithocheirus, or another large pterosaur. Maybe even a new species of them.

The "wings" could be a torn secodontosaurus' or another sailed pelicosaur sail.

And the least possible theory - it could be a baryonyx, or another small to medium sized spinosaurid.
Community content is available under CC-BY-SA unless otherwise noted.
Advertisement