Arabian Flying Snakes are shaped like water snakes with the ability of flight. They are said to have wings like that of a bat.[1] They were said to live under frankincense trees. The Arabians would burn styrax under the trees when they wanted to harvest the incense because the smoke would drive the snakes away. During Spring, they fly east from Arabia to Egypt. They travel through a mountain pass, where they are then attacked and eaten by ibis birds. [2]

When they mate, the female kills the male by biting through its neck. They also give birth to live young, instead of laying eggs like other snakes. The young are said to be born by eating their way out of the womb, killing the mother in the process. [2]

In the fourth century B.C., Greek historian Herodotus claimed to have seen a large number of skeletons belonging to Arabian Flying Snakes in the ancient city of Buto. He learnt everything he knew about the snakes by the Arabs who also showed him the mountain pass they allegedly flew through. He later wrote about this in his book the Histories.[1][2]

Although flying or gliding snakes of the Chrysopelea genus do exist, none are known to have lived in the Arabian region. The Arabian Flying Snake is thought to have been exaggerated retellings of locusts. A swarm of locusts could leave behind a large number of dead insects which may have been the skeletons Herodotus saw. [1]

Another theory is that the skeletons may have been fossilized bones of the Spinosaurus. These dinosaurs had spines along its back that supported a sail-like membrane. [1] 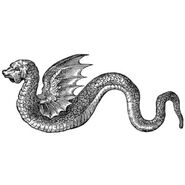