Ancient Aliens series revolves around the ancient astronaut theory, saying Aliens had contact with ancient people, and other creatures, even dinosaurs. The show often makes very 'fringe' claims often dismissed even by cryptozoologists and ufologists, such as Bigfoot being an alien hybrid and aliens wiping out the dinosaurs to colonise earth with humans 65 million years later.

A famous internet 'meme' featured below mocks Giorgio A. Tsoukalous' hair as well as the tendency to always conclude aliens were involved in any of the episode's topics. 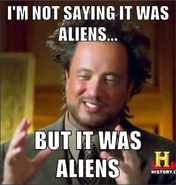