Cryptid Wiki
Register
Don't have an account?
Sign In
Advertisement
in: Dragons and Dragonoids, Lake Monster, Cryptids,
and 5 more

Amhuluk is a dragon-like creature that is connected to drowning, sickness, and fog that comes from the waters surface. The first nations group Kalapuya has found to Amhuluk to be living in a lake close to Forked Mountain.

Originally Amhuluk desired to live on the Atfaliti Plains but moved due to his hobby: drowning everything he sees. Many things surrounding the lake is changed due to Amhuluk.

Amhuluk was also featured as one of many Titans awakened by King Ghidorah in Godzilla: King of the Monsters, as well as appearing in the comic "Godzilla Dominion"

Amhuluk is a spotted dragon-like creature with two long horns on the top of its head. Its four legs are hairless. Amhuluk likes to keep his possessions tied onto its body. 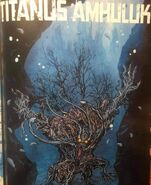