Cryptid Wiki
Register
Don't have an account?
Sign In
Advertisement
in: Cryptids, Carnivore, North America (Minus Mexico and Caribbean),
and 8 more

In the Great Plains of the American West, from at least Montana to Nebraska, there have been reports of an animal that seems to be a hyena. With a sloping back and hyena-like features, this beast was known to the Ioway Indians as the Shunka Warakin. Similar creatures with different names were reported from the lands of other tribes.

The animal was generally described as having dark fur, often black and sometimes red. The shaggy areas were distributed in a different way than on wolves. White settlers also thought they had seen this creature, and some were even mounted as trophies. Although the present whereabouts of these trophies is now unknown, one famous trophy had a picture taken of it, although it might have been a strange-looking wolf mounted by an incompetent taxidermist, only DNA testing could settle the question.

As wild America was despoiled, sightings of the animal almost died out. Today, there are still a few, but they are complicated by confusions due to folklore, apparent supernatural characteristics, and likely confusion with other reports of wolves, wild dogs, and dog-like cryptids of several sorts. It is possible that this creature is a remnant that survived all the way up to a hundred years ago, only for the last pockets of survivors to be exterminated before being officially recognized by science. Even if this is the case, it is still of interest to cryptozoologists, whose line of work includes studying animals that happened to go extinct before we could identify them, if those animals survived thousands of years longer than they were supposed to.

Or maybe it was a surviving chasmoporthes a ancient species of hyena which were once widely distributed across North America. It got extinct because of humans and end of ice age But maybe some species may make it up to this day and live without only a few people knowing. 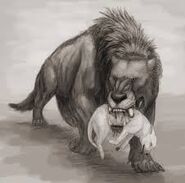 Shunka Warakin carrying away a dog 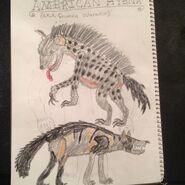