The Ambize is an enormous lake monster that is said to inhabit the African Congo. It is often described as having the body of a fish, the head of a pig (or an ox), a flat round tail, and most peculiar is that it is said to have human-like hands instead of fins. They are supposedly rare creatures and very difficult to catch due to their hostile nature, but are considered a local delicacy. The first sightings reportedly came from 16th century European explorers of Africa. Perhaps it could be a new species of large, (and very strange) manatee. There is currently no physical evidence to support the existence of the creature, only the reports from the explorers and natives. 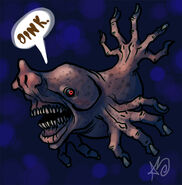