Cryptid Wiki
Register
Don't have an account?
Sign In
Advertisement
in: Carnivore, North America (Minus Mexico and Caribbean), Cryptids,
and 6 more

Amarok (or Amaroq) is the name of a gigantic grey wolf in Inuit mythology.

It is said to hunt down and devour anyone foolish enough to hunt alone at night. Unlike real wolves who hunt in packs, Amarok hunts alone. It is sometimes considered equivalent to the Waheela of cryptozoology.

In the 1972 novel Julie of the Wolves by Jean Craighead George, the first alpha male of the Avalik River Pack is named 'Amaroq' by Miyax/Julie. A pack of 10 Amaroks appeared in the The Secret Saturdays episode "The Ice Caverns of Ellef Ringnes" with their vocal effects done by Fred Tatasciore. The Amarok also appears in a mod pack for Zoo Tycoon 2. The Amarok also appears as a weapon in Terraria. 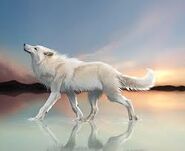