Akkorokamui (アッコロカムイ) is a gigantic part-human-part-octopus monster from Ainu and Shinto folklore, which lurks in Funka Bay in Hokkaidō, Japan, and has been sighted in several other locations including Taiwan and Korea for centuries. [1]

This creature is also known as Ashketanne Mat (Long-fingered Woman).[2]

According to Shinto mythology, the creature is human-like and contains a bright red color.[2] The 19th century account by John Batchelor confirms this. His book, The Ainu and Their Folklore, provides many details of the creature. It states that the creature was 120 meters in length. The book specifies that the red color of the Akkorokamui a striking red, seemingly “likened to the color of the reflection of the setting sun upon water”.[3]

The Akkorokamui is also characteristically described with the ability to self-amputate, like several octopus species, and regenerate limbs. This characteristic manifests in the belief in Shinto that Akkorokamui has healing powers. Consequently, it is believed among followers that giving offerings to Akkorokamui will heal ailments of the body, in particular, disfigurements and broken limbs. Nade yakushi is housed within the Takoyakushi-do, a shrine dedicated to Nade yakushi, along the street Teramachi-dori, meaning “Temple town,” in Kyoto.

“I shall swallow the whale and ship, empty the sea, and appear in red when you are cursed." ~~Akkorokamui

Once, spirits cursed Rebunge, a villager of Abuta Toyoura, to see the destruction of his town. They sent a part-spider-part-human creature, Yaoshikepu (ヤオシケプ), to fulfill the curse. Yaoshikepu caused rampant destruction throughout the town, slaughtering so many that the streets were filled with crimson blood. After hearing the townsfolk tremble with fear, the sea kami, Repunkamui, transformed Yaoshikepu into an octopus, and cast her into the sea.

After Yaoshikepu was cast into the sea, her size began to grow, eventually beginning to consume larger prey, such as whales and ships. One day, Akkorokamui gobbled up a boat full of fishermen. In her stomach, they called for help. Hearing the cries, Repunkamui poisoned Akkorokamui, giving her great pain. As Akkorokamui hollered in agony, the fishermen escaped. However, Akkorokamui learned to harness the venom, using it to attack her prey. In a 1800s sighting, John Batchelor stated that as the monster attacked the ship, it “emitted a dark fluid which has a very powerful and noxious odour”, confirming the myth’s actuality. [4]

Ainu reverence of this monster has permeated into Shintoism, which has incorporated Akkorokamui as a minor kami. Self purification practices for Akkorokamui are often strictly followed. While Akkorokamui is often presented as a benevolent kami with powers to heal and bestow knowledge, it is fickle and has the propensity to do harm. Akkorokamui’s nature as an octopus means that it is persistent and it is near impossible to escape its grasp without permission. Like other Shinto purification rituals, prior to entering the shrine of Akkorokamui, one’s hands must be cleaned with water with the exception that one’s feet must also be cleaned as well. Akkorokamui enjoys the sea and offerings which reflect this: fish, crab, mollusks, and the like are particular favorites of Akkorokamui, which give back that which it gave. Homage to Akkorokamui is often for ailments of the limbs or skin, but mental purification and spiritual release is particularly important.

Shrines in dedication to Akkorokamui and associated octopus deity are found throughout Japan. In particular, well known shrines include one in Kyoto and the island of Hokkaido that pay homage to Nade yakushi. These shrines, while named to different entities, come from and share various characteristics with Akkorokamui, and as such practices involving healing, renewal, and purification are similar. 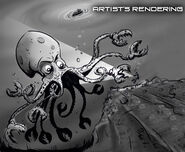 The modern depiction of Akkorokamui