Air rods, called "flying rods" and sometimes referred to as "sky fish," are something like crop circles in that even skeptics acknowledge their existence. The only question is what they really are. Air rods have never been seen live with the naked eye, but are picked up by cameras and cell phones all over the world.

Are they living creatures, alien probes, or some sort of 3D electromagnetic smudge? To believers in the cryptozoology-based theory of air rods, air rods are probably living creatures, and they are possibly related to older stories of atmospheric beasts.

However, these cryptids are a well-known phenomenon in the photography world. Air rods are video artifacts created from motion blur, especially in interlaced video recording, and are afterimage trails, typically of flying creatures, especially insects. As such, belief in these cryptids is practically non-existant in those versed in photography.

At first glance, Air rods seem bizarre, otherworldly, or even terrifying. The most studied air rod films showed air rods swooping within a dozen feet of the camera, coming close to the ground and going between objects with nearby trees and bushes visible behind the air rods. The rods moved with fluidity not unlike a worm's, and were exceptionally agile, appearing to fly with some unknown method that violated all of the known laws of physics. However more careful investigation reveals a clear, convincing explanation.

It is easy to hoax air rod photographs using models or computer generated images. It is obvious from the sheer number of air rods that hoaxers could not have pulled off even one percent of the pre-discovery air rod footage.

Air rods are the result of a fast-moving flying creature moving about in a camera's field of vision. They appear when a creature, typically an insect, although occasionally birds or bats, move quickly in interlaced video. In interlaced video footage, multiple still frames are placed in a single frame of the replayed video, increasing the perceived frame rate without consuming extra bandwidth. Once the video is interlaced, insects that would appear to be moving as normal are displayed as Air Rods. In still footage, rods appear in elongated shutter exposure speeds, when moving insects are captured on film multiple times along their path of flight, appearing to form air rods.

Air rods have been debunked as a problem with cameras that shows an insect's several wing beats instead of one, creating a rod effect (see picture above). When known principles of photography, universal to every modern method of capture, are applied to the case of Air Rods, it neatly explains every aspect of the case. The translucency of rods is due to the background being captured between frames. The agility and fluidity of motion incongruous to their size and shape is due to the physical body of the visual aberration being much smaller than observed. The fact that they are never seen with the naked eye, but commonly seen on camera is due to the capture methods of photography. The wild discrepancy between appearances, speeds, and habitats of air rods is due to the fact that many organisms are capable of producing the optical illusion. And finally, and arguably most conclusively, the lack of corpses, potential extant relatives, fossils, or ecological impact is due to the fact that the source of air rods are already catalogued as different organisms.

Air rods were discovered in the 1990s. People found that some films of all types, ranging from home videos to movies seen in theaters, had odd disturbances that looked something like blurry rods that were mostly transparent, occasionally whitish in color. Most of these disturbances were fast-moving and barely visible to the eye. These rods show up best against large areas of the same color, such as the sky.

The people who examined films for anomalies of this sort started calling what they did "sky fishing" because they usually started by looking at the areas of sky that were visible in films. They found that these rods were widespread. Countless films had them lurking almost imperceptibly in the corners, including old television shows, movies, films of sporting events, almost everything imaginable. There were simply too many examples to study them all, running into the thousands or tens of thousands. There were also air rods visible in photographs, but these were hardly studied at all for reasons that will become clear below.

Close study of air rod films revealed a number of very interesting features. As these rods zoomed about, they displayed all the features of three-dimensional objects. In other words, they were not two-dimensional blotches on the camera lens or on the film itself, but something out there in the environment that was actually being filmed by accident. This three-dimensional nature of air rods has been proven without a doubt by the types of measurements and tests that only professionals can do. Careful measurements showed that most rods were between four inches and three feet long. They seemed like uniform cylinders without any difference between the head end and tail end, with pairs of appendages along the length of this cylinder.

In some air rods, these appendages look like fins that vibrate rapidly along the entire length of the cylinder in undulating waves. Other rods have appendages that look more like very rapidly beating bee wings. Most of the time, rods are blurry and transparent in color, making them inconspicuous. A rare few are very white in color, sometimes an even, solid white. The cylinder part often resembles an out-of-focus hair on the camera lens, but the appendages along with the three-dimensional turnings and motions mean that genuine air rods cannot possibly be hairs on the camera lens.

In addition to their three-dimensional character, these rods seemed to act in intelligent ways. Sometimes several rods followed each other and seemed to play with each other in the manner that butterflies might play. Rods sometimes followed people. They never went through other objects, they always went around them, even when this meant deviating from the path they had been on before. This seemed to indicate that they could not pass through solid objects and that they might be alive.

However, if they were living creatures, why had people never seen them? Why did they only show up on film? And what could they possibly be made of?

This fad has produced a mountain of recent photos and films. Suspiciously, the whitish air rods that are easy to see are showing up much more frequently in these pictures. Also, since rods are blurry, a great number of rather ordinary things that probably are random anomalies of film developing or hairs on the camera lens have been identified as air rods by amateurs. It is easy for skeptics to demolish such pictures. However, if something has never been taken seriously by serious air rod researchers, skeptics don't prove anything by debunking it.

It has become popular among the faddish air rod supporters to claim that air rods can be seen with the naked eye, something that serious researchers have never suggested. It has also become popular to claim that air rods are not living creatures, instead, they are UFO probes sent by aliens. There is no particular evidence connecting aliens and air rods, people just think that it seems like a good idea. This idea is so popular that many believers have started calling air rods "Roswell rods" after Roswell, New Mexico, a town with a famous history of UFOs. Also, this is because the famous "cave footage" (one of the clearest known films of air rods) was filmed in New Mexico, but not in Roswell.

Apart from the fad and the people this fad has attracted, serious researchers are still trying to find a solution to the air rod mystery. The biggest part of this mystery focuses on what air rods might be made of. How can something be visible on film (even if it is inconspicuous) but never to the naked eye? There is no known material substance that has this property. Faddists like to claim that air rods move too fast for people to see them. This is simply not true. Although air rods are fast, many films show them taking several seconds to circle a person. Anything going at such a speed ought to be visible.

Air rods do look as if they vibrate at a high rate, lending them a blurry character, but this phenomenon is like that of quickly rotating blades in a fan. As the blades speed up, they become a blur and then gradually become almost transparent, but you can still see them. It might be possible for air rods to be nearly invisible if they are made of a small number of thin, transparent surfaces that vibrate or beat the air very quickly. If this is what air rods are made of, they are probably insects of some kind. They would be a new species since nobody has ever reported invisible insects before. Even so, it does seem suspicious that people cannot see them but the camera can. Even if they are transparent, quick-moving and blurry, it seems like people ought to be able to see them without the use of cameras.

Rods caused by moths gathering around a lamp 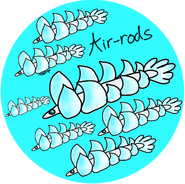