Back to page
View source

The Ahool or the Athol is a winged cryptid. Some portrayed the creature as a giant bat, while others claim it is flying primate. It was first reported by Dr. Ernest Bartels in 1925. It is said to live in the deepest parts of the jungles of [[::Category:Indonesia|Java]], and can be found across most of Indonesia. Sub-species can be found on the nearby island of New Guinea in the form of the Ropen, a cousin to the Ahool. The Ropen has a long snout, large wings and a long thin crest. It has a chimp's/bat's face, large dark eyes, red skinned wings, large claws on its forearms, and is covered in grey fur. It is said to have a wingspan of 12 feet, or 3 meters. That is twice the size of the largest bat known to man, the flying fox. Although it mainly eats fish, it will occasionally attack humans. One scientist theorized that the creature may be related to another cryptid, the Kongamato. But its description describes more of a bat-like creature than a reptile-like one. It may be more related to Orang Bati.

Female Ahools are very social, while the males live on their own, living in groups the females and their young remain together until the young are fully mature and capable to breed. Ahools are creatures that feeds on a large range of food sources, but will consume large amounts of flesh as they are very successful predators, preying on a range of large animals ranging from small cats to full grown humans. Ahools allegedly hunt their prey by upside-down stalking throughout the forest as the creature's large size proved to be easily noticeable if it were to stalk from the skies. The stalking usually lasted for about several minutes before the Ahool drops down from the treetops to its victim, jaws open wide, and "engulf" their victim with their large wings while delivering a fatal bite with their massive fangs to the victim's neck, cracking the spine and usually kills the victim instantly (similar to the leopard's method of killing). Some believe that an Ahool is actually a giant owl or bat.

The Ahool was a cryptid shown in Freak Encounters.

A drawing of the full body. 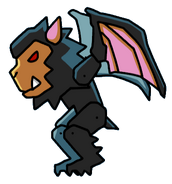 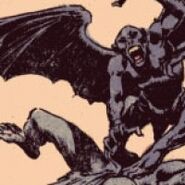 The size of an Ahool compared to the average Flying Fox