The Agta is a mythical creature found in Filipino mythology.

Its skin is very dark and would blend well against a night sky. Despite showing reasonable intelligence they generally prefer to be naked.

They reside in trees all over the Philippines, and it is not uncommon for them to be depicted as smoking a rolled cigar. They are said to easily climb down trees and roam around.

For whatever reason, they often warn fisherman not to go out on the water to fish and instead stay on land. They are even known to take drastic measures to prevent the fisherman from leaving the land, such as pushing down trees to block the coast. They are especially fond of Santo and Balete trees. 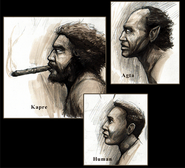 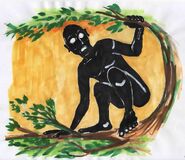 Add a photo to this gallery
Retrieved from "https://cryptidz.fandom.com/wiki/Agta?oldid=110477"
Community content is available under CC-BY-SA unless otherwise noted.