The Agogwe, also known as the Kakundakari or Kilomba ​in Zimbabwe and Congo, is a human-like creature spotted in the forests and jungles of East Africa. It was first sighted in 1900 by Captain William Hichens, but was reported thirty-seven years later in the December issue of the Discovery magazine.

It usually stands from 1 to 1.7 meters (2-5 feet) tall with several human features. The creature is also said to have odd characteristics such as long arms and rusty-colored hair covering its body, with yellowish-red skin under its coat. Sometimes it is described as copper. Its feet are roughly 12 cm long. The differences between the Agogwe and a modern chimpanzee is that the Agogwe has a rounded forehead, smaller but sharper teeth, and the hair and skin color.

The first recorded sighting of the Agogwe was in 1900 by Captain William Hichens, but the incident was reported thirty-seven years later in the December issue of the Discovery Magazine. He was apparently in the Ushur and Simbit forests, located on the western side of the Wembare Plains in Tanzania, hence:

“Some years ago I was sent on an official lion hunt in this area. While waiting in a forest glade for a man eater, I saw two small, brown, furry creatures come from the dense forest on one side of the glade and then disappear into the thicket on the other side. They where like little men, about 4 feet high, walking upright, but clad in russet hair. The native hunter with me gazed in mingled fear and amazement."

He later remarked that they are the "Agogwe, the furry little men that one does not see once in a lifetime." But only one year later, British Officer Cuthbert Burgoyne publicized an incident that happened in 1927, through the Discovery magazine 11 years later, in which he supposedly saw the same creatures that Hichens had seen years before:

“We were sufficiently near to land to see objects clearly with a glass of 12 magnifications. There was a sloping beach with light bush above upon which several dozen baboons where hunting for and picking up shell fish of crabs, to judge by their movements. Two pure white baboons were amongst them. These are very rare but I had heard of them previously. As we watched, two little brown men walked together out of the bush and down among the baboons. They where certainly not any known monkey and they must have been akin or they would have disturbed the baboons. They where to far away to see in detail, but these small human like animals where probably between 4 and 5 feet tall, quite upright and graceful in figure"

In the late 1950s, the third sighting was reported, this time it being Charles Cordier, a professional animal collector who allegedly saw the Agogwe in Zaire. It was entangled in one of the bird snares that he had set but escaped before he could do anything, as he said:

“It fell on it face, turned over, sat up, took the noose off its feet, and walked way before the nearby African could do anything.”

The Agogwe is likely a surviving species of australopithecine, a primate which lived 2.5 million years ago as a very early form of humans. 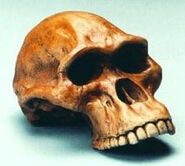