Peacocks (or more properly, Peafowl as peacocks refer specifically to the males of the species) are native to Asia. The species that is familiar to most people is the blue peacock, also called the Indian peacock because it is from India. It is tolerant of cold weather and easy to keep, so peacocks of this species have been introduced to many parks and gardens. The other familiar species is the green peacock. This is from southeast Asia, including Burma, Thailand and Java. It is kept less often because it is less tolerant of cold and behaves differently: squabbles are more likely to result in dead peacocks, and it doesn't have an instinct to stay home unless it is fenced in. The green peacock has a more brilliant color than the blue peacock, except for one subspecies that is dull in color. The green peacock and blue peacock can hybridize in captivity, but this isn't done often. There are several breeds of domesticated peacock, including all-white birds, but these are all mutants of the blue peacock.

For most of history, everyone assumed that all species of peacock had been discovered, and that peacocks were not native to any place other than Asia. Nobody expected to find another species of peacock existing naturally anywhere else, especially not in Africa. However, feathers like a peacock's, except that they were in a slightly different color scheme, were coming from the Congo, in the same remote area where the okapi was discovered. Further investigation revealed that the African peacock was real. This elusive and rare bird lacks the tail-fan that most people associate with peacocks. It has a shorter tail instead. It has duller colors than Asian peacocks. Despite the tendency towards dullness, both sexes have iridescent colors over much of their bodies. The male has a bluish color scheme and the female is an iridescent brownish-orange. Adult African peacocks look similar to Asian peacocks that are immature. They are real peacocks, since they are very closely related to Asian peacocks. This bird is also known as the Congo peacock, Congo peafowl and African peafowl. It is known to natives as the mbulu. 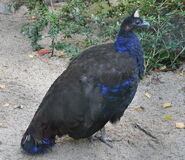 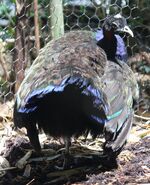 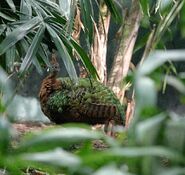 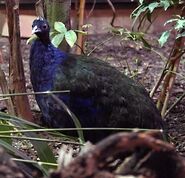