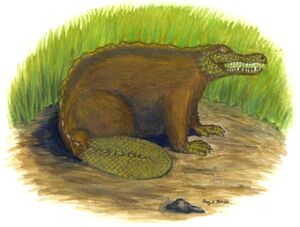 The Afanc is a lake monster from Welsh mythology. It's said to be a crocodile, dwarf, demon or beaver hybrid. The lake where it lives also varies; it is variously said to live in Llyn Llion, Llyn Barfog, near Brynberian Bridge or in Llyn yr Afanc, a lake near Betws-y-Coed that was named after the creature.

The Afanc was a monstrous creature that, like most lake monsters, was said to prey upon any foolish enough to fall into or swim in its lake.

One of the earliest descriptions of it is given by the 15th century poet Lewys Glyn Cothi, who described it as living in Llyn Syfaddon or Llangorse Lake, now in Powys.

One tale relates that it was rendered helpless by a maiden who let it sleep upon her lap; while it slept, the maiden's fellow villagers bound the creature in chains. The creature was awakened and made furious; its enraged thrashings crushed the maiden, in whose lap it still lay. It was finally dragged away to the lake Cwm Ffynnon, or killed by Peredur (Percival, Peredur's name in Chrétien de Troyes' telling of the Arthurian legends). In the tale, Peredur son of Efrawg, translated by Lady Charlotte Guest in the Mabinogion taken from the White Book of Rhydderch and Red Book of Hergest, the 'Addanc of the Lake' resides in a cave near the 'Palace of the Sons of the King of the Tortures'. The Palace is so named as the Addanc slays the three sons (chieftains) of the king each day, only for them to be resurrected by the maidens of the court. It is not stated why this cycle of violence continues, but when Peredur asks to ride with the three chieftains, who seek out the Addanc daily, they state that they will not accept his company as if he was slain they would not be able to bring him back to life. Peredur continues to the cave on his own, wishing to kill the creature to increase his fame and

honour. On his journey, he meets a maiden who states that the Addanc will slay Peredur through cunning, as the beast is invisible and kills his victims with poison darts. The maiden, actually the Queen of Constantinople, gives Peredur a seeing stone, which will make the creature visible. Peredur ventures into the cave and with the aid of the stone, pierces the Addanc before beheading it. When the three chieftains arrive at the cave they state that it was predicted that Peredur would kill the Addanc.

Some legends ascribe the creature's death to King Arthur. Close to Llyn Barfog in Snowdonia is a hoof-print petrosomatoglyph etched deep into the rock "Carn March Arthur", or the "Stone of Arthur's Horse", which was supposedly made by King Arthur's mount, Llamrai, when it was hauling the Afanc from the lake.