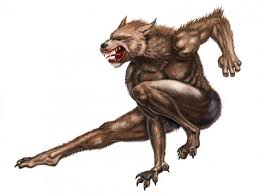 The Adlet are bloodthirsty creatures based in Inuit mythology. They are also known as Erqigdlit to the peoples of Greenland and Baffin Island. Werewolf-like in appearance, it is said they are the result of a union between an Inuit woman and a giant dog.

According to the myth, the woman gave birth to ten children: five were dogs, and five were Adlet - they bore the lower halves of a dog's body and the upper halves of a man's body. Terrified, she set five of them adrift in the sea. These five managed to cross the Arctic and Atlantic and spawned the European races.

The other five children that stayed with their mother became ferocious, flesh-eating canine hominids who would attack anyone they encountered. The Adlet and their offspring (also called Adlet) now wander the tundra in packs, seeking out Inuit villages to feed on.

A theory proposed by the team of American Monsters states that due to the questionable story of a woman having a child with a giant dog, it is more logical that the Inuit woman had relations with a Werewolf, or with a creature of Native American mythology known as the Wendigo. The latter may explain the Adlets' taste for human flesh, although this could just be due to their carnivorous nature.