The Abbagoochie (pronounced abba-GOO-cheez) is a creature resembling a cross between an owl, a fox, and a deer. It is indigenous to Costa Rica, where people refer to it as a "dry land piranha" because it will eat anything, including creatures far larger than itself such as horses and cows. If cornered, an abbagoochie will consume itself "in a devilish whirlwind" rather than allow itself to be captured. They mate only once every 6 ½ years. The creature is very likely a hoax; however there're actual reports of the creature that might differentiate it from more legitimate hoaxes as a more validated cryptid.

In 1999, in an ill-considered move, the West Virginia Division of Natural Resources (WVDNR) introduced thirteen baby Abbagoochies from Costa Rica into West Virginia in order to keep down the population of overpopulated predators such as coyotes and rattlesnakes. But soon, as reported by Jim Wilson of the Webster Echo in February 2001, the abbagoochie itself multiplied out of control and began attacking livestock. Soon after Wilson's article appeared, sightings of Abbagoochies began occurring throughout the region. Some farmers began carrying shotguns in order to protect their livestock. Concerned parents walked their kids to the school bus to make sure they were safe. And one man reported that he had accidentally run over an abbagoochie.

Although this creature is mostly a hoax, there's some truth to it.

" Just for the record, ...The Abbagoochie is NOT a "hoax".  While, yes, a "hoax" was perpetrated in 2001 involving the "story" concocted by Jim Wilson in the Webster Echo, ...this was not the "origin" of the Abbagoochie.  No.  This was simply an attempt to revitalize and commercialize an earlier set of events dating back to 1992 that took place primarily in and around Upshur County, WV.

The original events from 1992 are those in which the name "Abbagoochie" was coined.  Not to mention that the descriptions of this creature were a match to those of the Sago Monster and the Stonecoal Monster from the 1960s ...in the very same area.  Descriptions that are vastly different from those of the 2001 hoax descriptions.

The Abbagoochie is NOT described as being a "small" creature.  It has been described (by many eye witnesses) as having resembled a deformed wolverine or badger, ..."the size of a small car".  A form that looked nothing like any bear.  It was reported to have rampaged through a campground in broad daylight, killed several cows, sheep, and dogs, and was sighted on several properties throughout Upshur County from fall of 1991 to spring of 1992.

Locals were angry.  Hunting parties were formed.  More sightings were reported.  I recall a "Panther Research Center" posting an ad proposing that this was possibly a "black panther".  Another ad was posted from a different source stating "If you find it, ...do not shoot it."  Witnesses who had never met each other gave identical testimonies and all artist renditions matched perfectly.

These are the events that started it all.  And nearly a decade later, a writer from a neighboring county decided to discredit every bit of it by publishing that pathetic drivel for his own gain and publicity.  I was there in Upshur County in 1991 and 1992.  I remember it all clear as day."-Jamie Hitt 2 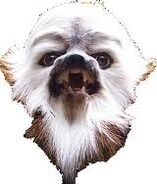