Abarimon are a legendary race of Himalayan humanoids with backwards feet. The name Abarimon comes from the Latin prefix 'ab' (meaning at, to, or within) and 'arima' (meaning rocky mountainous country). Together this can mean 'mountain-dweller'.

The Abarimon were humanoids with backwards feet. Despite this, they were still able to run at great speed. They lived alongside wild animals and were vicious themselves. Attempts at capturing them failed because they were so savage. They were said to be found in a valley of Mount Imaus (a place now called the Himalayan Mountains). Folklore says that the Abarimon breathed in air only of their own valley. Because the air was of special quality, this made them impossible to breathe any other type of air and were unable to leave their valley.

The Abarimon were first described by Pliny the Elder in his book, Natural History (VII 11). He considered them to be native to India. A similar story is told by Aulus Gellius in Attic Nights. 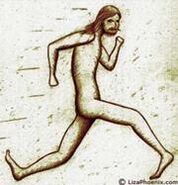