Abada is one of the names given to a supposed unicorn living in Africa. Giovanni Cavazzi, when travelling in Portuguese Angola, heard about a creature similar to a horse but larger and having a head similar to a deer. It had two horns, one on the forehead and another on the nose, both of them of great virtue. He also mentions another creature called abbada (ndemba in the Congo language), which is the African cousin of a "true" (Indian) rhinoceros and has three horns – on the nose, on the forehead and on the back.[1]

Girolamo Merolla also writes about the unicorn called abada living in Congo. It is the size of an ox, but has only one horn on the forehead. Only the males are endowed with it.[2]

It must be noted that the word "abada" itself is an old Portuguese designation for a rhinoceros, taken from Malay بادق‎ bādaḳ.[3] 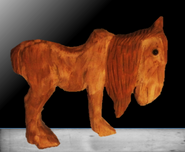